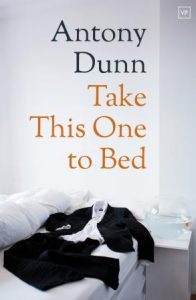 Paperback and exclusive limited-edition hardback, signed and numbered by the author.

“dazzling technical expertise… depth of knowledge worn lightly… killer last lines. These are simple, accessible poems which in fact disguise great subtlety and a new maturity and wisdom. So many wonderful poems… a collection to savour.”
The North, March 2017

The poems in Take This One to Bed explore the passions and tensions of how we live together – as neighbours, as families and as lovers – and as companions to our own various selves.

Here are stories of experience and imagination – of a man’s clothes taking on a life of their own, of a city overcome by an epidemic of weeping, of two goldfish in an emptying house: touching and enchanting tales that combine bittersweet comedy with an unflinching account of human nature.

At the heart of this deeply affecting collection are poems that dwell on the domestic crises that define our lives, that tell ‘how our hurts come down… Hard and without warning’, and ask how we might come to live with them.

Take This One to Bed is a memorable, thought-provoking and ultimately uplifting response, in a poetry ‘made delightful by the elegance of Dunn’s art’ (Acumen).

“For an absolutely stunning collection and another aesthetically pleasing publication, you can’t go wrong with Antony Dunn’s new work Take This One to Bed, with Valley Press. It’s been a while since we’ve heard from Dunn and this has been absolutely worth waiting for. Dunn is not afraid to weave a little surrealism and magic into his poems, and in this collection the poems are dropped like pebbles into still water, to ripple back against themselves, connecting and resonating.”
Northern Soul, Best Reads 2016

‘Advent’ was commissioned for The Guardian in 2010 by Carol Ann Duffy, who also commissioned ‘Eighteen’ for Jubilee Lines (Faber 2012). ‘In Vitro’ was commended in the National Poetry Competition 2011. ‘Suburban’ was broadcast in ‘The Bards of Whitelocks Bar’ on BBC Radio 4 and several of these poems were broadcast on BBC Radio Leeds.

Other poems from Take This One to Bed have appeared in: