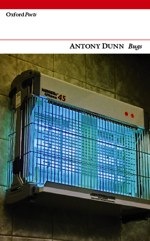 “For all its seeming lightness of touch, Dunn’s poetry is very much alive to slips and lapses that shadow any attempt to describe the world.”
Times Literary Supplement

Bugs are the insects we live alongside, necessary and unsettling; they’re the fears, the ailments and spies that keep us wide awake at night. The stories in Antony Dunn’s third collection range from the microscopic lives of parasitic worms to the lives of the planets themselves. We go from the miniature world of the flea circus to the invisible pervasiveness of electronic surveillance. In an uneasy world, Dunn’s characters face down their terrors and find in science, in faith, in love, courage to go on.

“deeply impressive… [poems] made delightful by the elegance of Dunn’s art, by his inventive wit, his sensitivity to the multiple meanings and resonances of words coupled with lightness of touch in deploying them, his powers of cinematically vivid description, his flair in the handling of implicit and explicit metaphors and similes, his deft shifts of tone, and his imaginative fecundity.”
Review by Edmund Prestwich for Acumen magazine

“an inventive and highly enjoyable collection that shows us the world through a magnifying glass.”
The North

“I’m really enjoying Antony Dunn’s new collection Bugs. I’ve been a fan of Antony’s careful and precise verse for years; I think he really enjoys celebrating the uncelebrated, in a way that many poets threaten to but don’t quite bring off.”
Ian McMillan, The Reader

The usual suspects, of course – the phone
and the barrel-end of his fountain pen,

the picture frames, reading lamps, ceiling rose –
he’s been through them all leaving microphones.

But more; the whole house is listening out.
One stitched in a pillow, one sunk in soap,

spiked in a wine-bottle, tapped in a plug.
And now he himself can’t for certain recall

which will trap then transmit his every breath.
He’s proud of this work he’s done in his home

and it’s finished, apart from this one last thing:
to wait for what comes in the small-hours’ dark;

for the tell-tale scuttling outside the door,
for whoever it is that’s been listening in.

He opens his mouth.
If you’re there, I’ll begin.

When the time came we packed up the Big Top,
stowed it in the trunk and drove off the map.

Back in the dark the glass tent came alive:
trapeze and cannon, plunge-pool and high-wire,

everything shaken to a frenzied show.
And though we’d later accuse – come to blows –

we’d never be sure which of our number
left the Top unhooked; by trick or blunder

let our stars seize the chance, make a clean jump
out through the countless non-doors of the trunk.

But fled they were, for sure, when we arrived.
And though we made the best of it, and thrived,

found ourselves skilled in micro-mechanics,
some of us resented living off tricks

and felt in the itch of our bad-feeling
the bite of our great hope’s flight, the bleeding,

the drop-by-drop drain of a life gone thin.
The fleas, somehow, still, get under our skin.