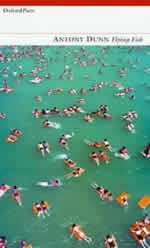 Antony Dunn’s second collection of poems glimpses ‘the otherlife’ of things caught out of their own element. From the flying fish of the title poem to a prehistoric monster discovered on a market stall; from a budgerigar-fancier’s mysterious accident to a goldfish collector’s obsession; from Barbados to the end of Cleethorpes pier, this book is filled with characters and creatures who, for one strange moment, become more gloriously – or more horribly – themselves than ever before.

The poems in Flying Fish wrestle with our pre-occupations – our fascination with the sea, our helplessness in the face of love and loss, our fear of age and all that lies beyond – testing our borders and boundaries for places we can call home.

“an alert, intelligent book… poems which, Brodsky-like, take the reader somewhere new, jinking round the corners of places we think we know into imagined elsewheres… there’s much to admire”
Poetry Wales

The way he tapped wafers of cuttlefish
with propitiatory fingers
into the backyard aviary
was the way he cleaned the stained glass windows;
his focus falling far beyond
the budgerigar colours. So.

Perhaps some annunciation of light
quickening the still life of glass
surprised him like fox-fluttered wings,
but his wife was looking the other way
and he can’t recall. The neighbours
are calling it a miracle:

how he hammered his palms against the lead
and balanced his ladder upright
for a moment – then the slow curve.
Transfigured, arms ablaze with coloured plumes,
he wrestled a night-long angel
down the up-rushing rungs of light.

but his wife did see how he came to rest –
his arms spread across the altar,
his gaze rolling the roof away –
how he stood up, walked with his hip knocked out
and came home the same man, the world
flapping and squawking around him.

In the backyard he drops seeds through the bars,
stares through the golds and greens of birds.
Doesn’t like to talk about it.
And he wears the colours of his one bruise
lightly, as if they were nothing
but a buffet from a bright wing.

Of course, it all began at the fairground
with the plastic bag and its single fish
like a magic sweet.

That, and the colour of the water-light
in the darkness of the aquarium
at Regent’s Park zoo.

How the dappling blue from the bedroom tank
lay along the body of his young wife,
jewelling down and sheen;

and how the fish gaped at their liquid sprawl
mouthing o, o, o, and fluttering fins
coy as paper fans.

How aquaria scaled the living room;
tank after tank, big as pyramid blocks
with their quick treasure,

up the four walls, on shelves above the door,
the TV viewed through a lens of water
and blundering fish.

How he lip-read her complaints – o, o, o –
deaf as glass in the water-light, when he
took out the light-bulb

and took to sleeping in his chair, among
the Commons, the Bubble-Eyes and Fantails,
the Celestials.

How the air was spiced with weed, and sluggish
with the weight of water. Sealed – him, never
coming out, nor her in.

The suitcase down the stairs, the slammed front door
shake the gold blizzard of his toy-storm room
which never settles.

Still in its midst, the bang sets him thinking.
Clear out the basement, the dust-fossils of
wedding gifts, memories;

waterproof the walls, run a hosepipe in.
Lay a new glass floor in the living room,
buy a modest shark.

And the goldfish, quietly clamouring,
stare in at him as a sleepy thought sparks
in the bowl of his skull;

a whole town of roof-top salt-water tanks,
and the blue sky alive with flying fish,
skimming home after home.