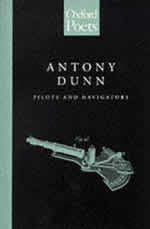 “Dunn, also an actor, was the last new poet published by Oxford University Press before their commercial decision to axe contemporary poetry altogether.

“Thankfully, Carcanet have picked up this collection, a confident and stylish book by so young a writer (Dunn is not yet thirty). Formally, one could not find fault in these polished stanzas, and Dunn displays an instinctive sense of line and subtlety of rhythm. The title conjures up expectations of a different book, but travel features often, whether touring with actors, ferry trips to Brugge or Dublin, cars in driving rain, or an ancestor’s (perhaps apocryphal) voyage to England with his own ‘secret Scyllas and Sirens / with which to contend’.

“The touring actors appear in various poems, but in ‘Bournemouth’ Dunn looks beyond the artifice to ‘the unreeled sand where its own, its true story / is played out quietly by a cast of dumb extras’. The real territory of this book is youth and uncertainty: in the poem ‘Halloween’ he counteracts the group of friends’ efforts to terrify each other with the underlying fear, ‘We are most afraid of the future’s ghosts – / of being helpless. Of the moon turning / its profile, of the fruit going to seed.’ Friendships, adventure and fledging relationships are set against questions of identity and delight in experience. Dunn’s stance is observational and his voice has a trace of English reserve, resulting in a tone of detachment that is at once enabling and limiting. Pilots and Navigators is an accomplished debut from a poet we’re sure to hear more from.”
Bloomsbury Magazine

As if the sea had gathered itself up
and heaved its solid mass onto the sand,
a blue whale, helpless in its own tonnage,
drying on the strand near Lisdoonvarna.

The boy was five when he crested the dune
and faced the mountain head, the eyes as big
as motor lamps, when his twin sister hid
behind him saying, save me from it, John.

Stricken U-boat, sick kraken; a marvel
before which he held his forgotten net
like a trident, powerful as a god,
a tiny Poseidon touching the beast

until the men came, and shouted for wood
and buckets, and slung a catamaran
beneath the patient hulk, while the women
and children watered the steaming shoulders.

Well, they floated it alright, and went off
to the craic and fire of the village pub,
and the boy heard their singing from the beach
as he watched the whale, helpless as a wave,

turn about and climb back onto the sand,
huffing and whistling into its death-place
and fixing with one eye the lonely boy
standing up to his waist in the water

flinging handfuls of sea at its great head
and shouting breathe, now, breathe in his right air.

Judith with the Head of Holofernes

Judith cannot wait for the invention
of the camera. Posing for the umpteenth
sculpture this week, the chinking of chisels
bringing on a migraine, and that red paint
in the carpet nagging at her tired eye,
she is fast losing her fabled patience.

Besides, she feels daft standing for sculptors
and painters with her ammunition pouch
of lipstick, perfume and blade in one hand
and a big pineapple in the other –
the head of Holofernes is stinking
on a stake above the city’s proud walls

while the whole paparazzi of artists
drools shamelessly over flesh, quick and dead.
The papers will insist on calling her
the Black Widow, and their readers, of course,
don’t want to hear that God has been involved –
always sure to spoil the human angle.

Hard to look triumphant when her triumph
is so misunderstood. Best to daydream,
not interpreting pictures of herself
chained to railings, or throwing her body
beneath Nebuchadnezzar’s horse. Patience.
Give them breasts and thighs for now. God later.